Must Read:ETF CRASH incoming says Michael Burry of The Big Short, are we double phucked?

How Jamie Dimon helped create Bitcoin… and the real problem…

Jamie Dimon, you would think is no friend to bitcoin, but in reality, is he really? What if we told you that thanks to bankers like him, The Federal Reserve, and even the U.S. Government that actually helped create it! Strange as that might sound there seems to be some truth to it. Before we begin to tell you this story, please note these are my own opinions and views, that may or may not contain complete facts to substantiate these notions.  You as the reader get the right to decide what makes sense and where the smoking gun lies. One of the biggest facts lay directly in the code of Bitcoin itself from what is called the “Genesis Block”  embedded in the very first block ever mined of bitcoin are these words:

The Times 03/Jan/2009 Chancellor on brink of second bailout for banks.

Some might say this is just coincidence, just like coincidently Jamie Dimon dislikes Bitcoin so much. It to me clearly states that the creators of bitcoin were vehemently opposed to the banking system and their corrupt actions that almost took down not only the American economy, but the economies of the free world, and only with U.S. taxpayers money were they able to survive the crisis they caused. Later when examining the numbers we find that this was the largest wealth transfer in history and only can be described as government-supported inverted bank robbery, where the banks seemingly robbed the customers/taxpayers.

This can be argued many ways to the inverse, but if we look at the chart below, can you really take opposition to the idea the bankers transferred the wealth of the middle class/poorer and larger %s of our population to the very rich and ultra-rich populous? The effects of this are still being felt today, and worse yet are the economic lending practices afterward, which seems to have opened Pandora’s box for corrupt economic policies of massive government borrowing, to which most futurists/economists agree is unsustainable and consider it a ticking time bomb.  When researching this article, I could understand why Jamie Dimon disliked Bitcoin so much, it was like a GIANT FU to him, The Fed and even the U.S. government. It portends a shift in future thinking, that will allow not only people of the U.S. to free themselves, but as well whole nations under the thumb of our oppressive system, and monetary policies that have us viewed as a financial dictatorship in many parts of the world. I will now start to go off the deep end for you, as JD and his Bitcoin antics are trite, merely a distraction from the real evil that lies before us, like a bad 80s horror movie victim trying to escape, get your popcorn when the phuck did Freddy Kruger become a banker or Jason Voorhees a politician!?

America deserves to return to the vision of our forefathers and break away from Private Banking Oligarchy of the 1 and .01% to which we can see an almost oppressive state of existence for the average American. Make America Great again? The best way to think of our current state of being is one of a giant monopoly game where if you break down the statistics of wealth ownership we can see the players in the very small % of populous that owns all the railroads, utilities, and property, as we roll the dice circling the board we are going to stop playing, as to our dismay we can clearly see bankruptcy is imminent. This is why most monopoly games with the family end early as once the losers get the idea they are done for, they simply stop playing… Well, I think we are starting to get the idea we are done for in the U.S. but this is not a friendly game of monopoly we are playing, these are our lives and the lives of our families that are being played with. Though I know my longstanding membership in the two-party system of my beloved country is likely to be revoked, I can only think to say… GOOD!

The wealth you have if others must suffer because of it, is no wealth at all. 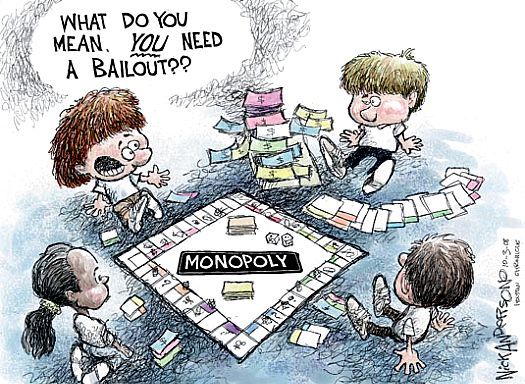 Not enough to vilify and blame, no point really. I am an engineer, never seen problems get solved by complaining about them, or abusing those who may have caused them for the most part. So no point in blaming  Jamie, The Fed, or even the U.S. government for the atrocities which will be assuredly felt in the future. The real question is how do we solve this most insurmountable problem, along with this divisive and predatory system of which we live under? We simply have to create the most elegant and sublime solution in our age ever imagined!

The care for one another…

I have seen so many times problems become worse with such actions as to blame and vilify, and often in our political system, it is used as tactical maneuvering/rhetoric more so than actually looking to solve problems. The amount of time most politicians spend in this pursuit of these political pillow fights, most problems could be solved in a fraction of the time. If only a small amount of this attention and energy compared to the effort they spend into trying to kill each other with their childish slap fighting and soft blows of inane commentary. The future generations starting with the digital millennials don’t care, they want solutions, not your childish sleepover wars that do nothing but provide a distraction for the real and corrupt legislation that is as deadly and sharp, enacted upon our society like an assassin in the cover of darkness.  They do not even care to know the details anymore of the devil’s handwriting, they only want RESULTS, and they are becoming all too aware that they won’t get them from you, so they will simply find somebody who will provide them. Their generation’s survival depends upon it, as most in government seem to no feeling for them or their future, and they are very very aware of this.

The dream… It is not hard to imagine a child in America playing online a game with a child in China, both having families that wish them to have a happy and productive life, ones better than their own. The values I speak of here are not just the values and visions of our American forefathers, they are values of the free world. Bitcoin is an awaking of those values through the lens of our times, it is both an evolution and revolution of a new generation that simply wants FREEDOM! The youth of this new generation is like a store of gunpowder on the top deck of a pirate ship, perfectly positioned to kill the enemy but not the ship. Their intelligence and speed, which is often mocked or overlooked because of systematic cajoling and handholding from their parents and previous generations, of which these previous generations are so unable to comprehend the true strengths and succinct synchronicity with the age of which they are in. I find them amazing and great assets of inspiration alone in much of my thinking these days… As they learn to stand, they will change the bedrock on which we live, for the better.

Look I am a BRICK of a writer, with run-on sentences and grammar that scares most English teachers I could imagine into a stroke. I can’t be helped as I find the English language a twisted python, missing scales, and teeth. I all too much enjoy the bending of it. One of the things I love about my partners writing on this site, of that sometimes he is abused by others. “Far better to have no limits of a box, then be the box.” As a child numbers and math were my attraction, often it told me the real story without manipulation of facts to such a high degree, but in time I learned that even numbers could be used as a tool of manipulation, though truly elegant and sublime notation has the effects in its most simple form to provide the underpinnings of grand transformational effect. In short, I learned both to understand much by numbers and how to find the TRUTH in them. In long I learned to connect the dots and branch the most obscure facts of both the minute and the magnificent. I was a fixer and knower simply put, give me a problem technically and I will find both the cause and solution, as well chat an hour about it philosophically if you like. In this story of Jamie Dimon, The Fed and U.S. Government I can honestly say to them

You have been weighed… You have been measured… And you absolutely… Have been found wanting… Welcome to the new world. God save you if it is right that he should do so.

Rico Chette
Bigger than the industrial revolution, "Smart Contracts" will change our world! We are the CRYPTOlution! I am the voice in the back of your head providing you insight of all things Crypto/Blockchain, so as I whisper in your ear, listen close...
You might also like
BitcoinScamINVESTING IN CRYPTOCURRENCIES
MORE
Read More
1970

Smart Options Is Expanding Into Something New, And You Will Definitely Love It!
Read More
410

Decentralized vs Centralized Bitcoin Exchanges – Can They Co-Exist?
Read More
95

The Ultimate REVOLUT Digital Banking Review: How Does It Work and Who Needs One?
Comments
Leave a response

CoinMarketAlert – Set all kinds of Crypto Alerts
Next